On the 28th October Louise, Mike and Malcolm set up the MCT Gazebo in Dringhouses Library ready for their Thursday event. The next day Pat Proctor, Chloe and Louise helped Malcolm trim the vegetation growing through the fence from Mayfields into the Nelsons Lane playground. 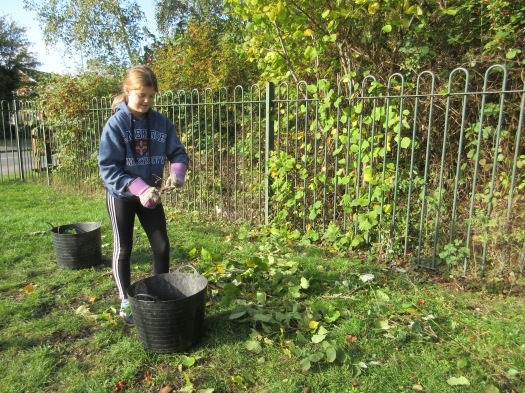 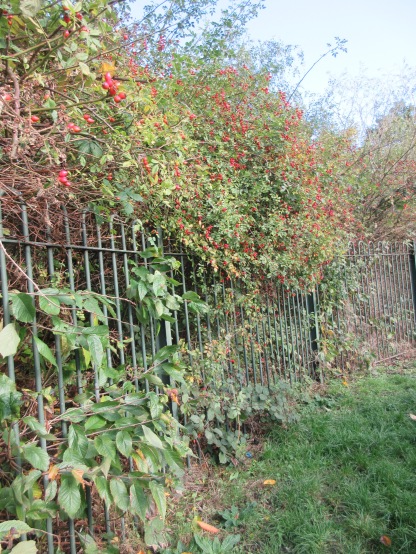 With help from James and Mike Ridealgh. Malcolm had about 90% of the wild-flower meadow trimmed by 23rd October when heavy rain stopped activities for a few days.  We hope to be out again on Sunday 27th October at about 11 (remember clocks go back!) if anyone would like to help. 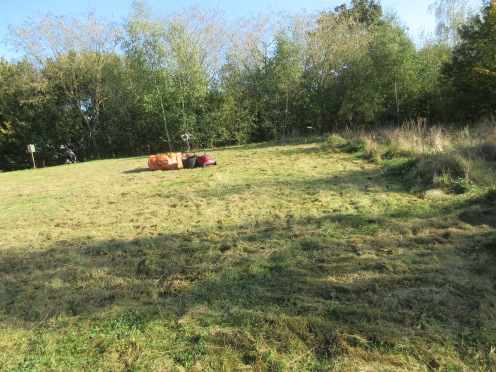 Photo shows the remaining sector (wee bit of a challenge for the mower!).

By Oct.19 we had managed to trim half of the wild-flower meadow, getting it ready for winter.  Hope to have another volunteer session on Sunday Oct. 20th, at 11 and again at 2 in the afternoon.  Any help would be most welcome, just come and find us on the site.

This photo of Mike Ridealgh on October18th shows effects of the 3-step process, strimming to reduce clumps, raking and then mowing at 4 cm.  We’re always on the lookout to protect frogs and toads!

We have also been filling some of the depressions in the main path recently.  They are mainly caused by roots growing under the path.

The photo above shows the typical small puddles formed after prolonged heavy rain. Photos below are shots before and after adding pea gravel and levelling on October 15th 2019. 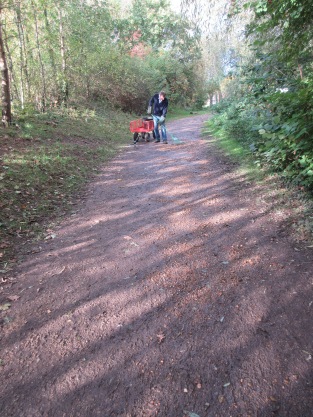 By October 13th, 2019, MCT volunteers had done 8,000 hours of unpaid volunteering on the Mayfields site north of Nelsons Lane.since they started in 2012.
We’re getting well into Autumn now. A good time for planting Fritillary bulbs kindly donated by Tim Shepherd, but also important to start trimming the meadow before winter sets in. We also work on the paths between showers, weeding the main path and collecting up fallen leaves before they turn to a muddy deposit.

Corner of the meadow trimmed on October 15th. 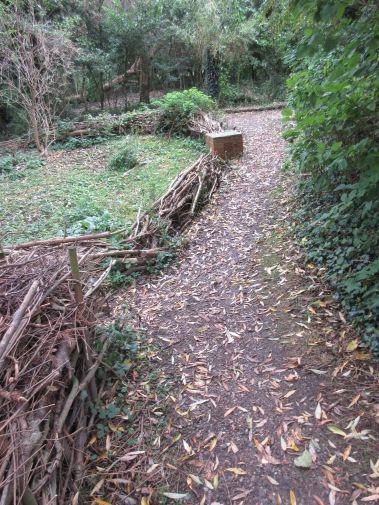 Before and after shots of rear path after gathering leaves with a mower.

MCT is grateful to the Dringhouses & Woodthorpe Ward Committee for financial support to set up patches of poppies, cornflowers and corn marigolds around the edge of the wildflower meadow.  We will add new seeds in autumn and spring each year to areas with carefully prepared soil.  The plants in our earlier trials with poppies did not set seed.  We think this is due to pollinators preferring other flower species blossoming at the same time as the poppies.

Poppy pods with no seeds at end of August. 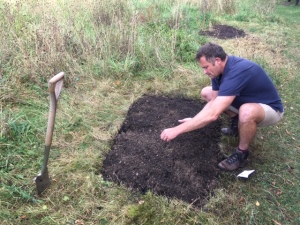