Elsewhere on our blog we mentioned planting English Bluebells (Hyacinthoides non-scripta) rather than just “bluebells”.  MCT has planted over 900 English Bluebell bulbs on the site in dappled shade areas.

MCT is very keen to ensure that eventually all bluebells on the site of the native English type, but at present the highly competitive Spanish bluebell  (Hyacinthoides hispanica) also occurs in small clumps at various places, and so do hybrids.  Throughout Britain efforts are being made to restore and preserve the genetic purity of our native English bluebell while it’s still possible. The nicest way to distinguish between the two is to sniff.  English bluebells have a beautiful delicate hyacinth fragrance. Spanish and hybrid varieties have little or no smell. and even without bias you might find the slight smell almost unpleasant.

Another way is to look carefully at the pollen on freshly opened flowers. It’s creamy white on the English bluebell but blue or bluish-green on the Spanish ones and most hybrids.  But note that once the pollen is shaken off the anthers on the Spanish blubell they may look creamy white too.  You can see the difference in the photo below:

The upper bluebell is an English one, the lower one is a Spanish bluebell, both growing on the Mayfields site; note the blue pollen on the lowest flower in the freshly opened Spanish bluebell. 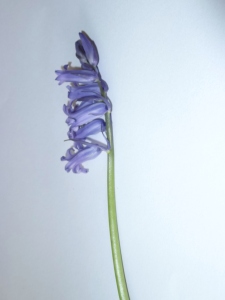 Note also how the flowers on the English bluebell lie to one side of the stem and often the top of the stem is droopy.  The Spanish bluebell and hybrids generally have flowers around the stem and also often have broader leaves.  Though they are decorative, if we leave them eventually the hybrids from seeds would almost certainly take over, and MCT wants to avoid this happening.

If you’d like more information we strongly recommend the Natural History Museum web site, which currently has a short video on the subject.