We had a good session with  Adam, Ellie Tom and Lauren (our Askam Bryan Volunteers) on 9th Jan.  We managed to improve tree architecture for some birch trees while coppicing hazels and trimming roses to give the birches more space and light to grow.  We also spread 6 bags of 20-mm pea gravel at the south end of the rear path, which had become very muddy and slippery after recent heavy rainfall.  You can see their efforts and the progress of our Snowdrops on our Facebook page.

On 27th Jan we decided to move access to the composting area so that it was no longer via a slippery slope.  As the photo shows Lauren, Tom, Ellie and Adam extended the dead hedge to define the route, which is now much safer.

As well as spotting the first snow drops flowering on Feb 2, we noted that our recently installed leaf-mould container seemed to be functioning well.

It was nice and warm for our Askham Bryan volunteers on Thursday19th.  They worked with Mike and Malcolm  removing some dead wood and excessively competitive growth from the north end of the west bund and collected up more fallen leaves for the leaf-mould container.  That enabled them to add pea gravel to that end of the rear path where it had been getting muddy and a bit slippery. 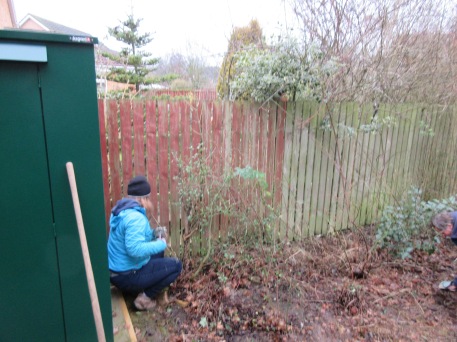 On Jan 12th our Askham Bryan volunteers were back, and helped Mike & Malcolm erect a more permanent storage area (posts and green PVC-coated mesh) for preparation of useful leaf mould. It allows free air entry and has a loose cover to stop it getting too wet at times.  Ellie and Mike spotted another fascinating centipede lurking under the old storage bags. 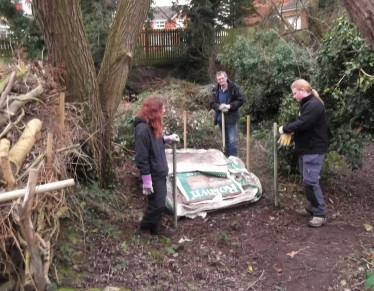 Adam, Ellie, Tom and Lauren were back on Mayfields on 5th Jan, working with Mike and Malcolm trimming over-grown roses (some with much dead wood!), hazels and guelder rose beside the path.  As you can see we were distracted by 4 hungry/optimistic robins, so Mike’s heading off to catch one for a photo (you can see the other 3 on our Facebook page).

You can also see shots of some interesting soil fauna on our Facebook page.